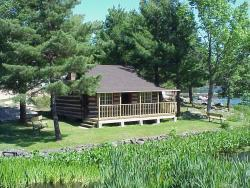 From the vantage point of Col. Ireson's verandah, the McArthur Brothers, Mac, Bill (Sr.) and Jim (Sr.) decided in 1922 that something had to be done to improve the mail service, the forest management for the protection of game, and the fisheries. In 1924, concerned people on the surrounding lakes came together in Toronto and signed the charter in the old city hall. The word pioneer is used because the Association's founders were among the first to identify the compelling need for conservation of wilderness places; in those days, the wilderness and its creatures on land and in water, seemed inexhaustible. Magnatawan (NB--original spelling contains no e in Magnetawan) is also used in the title because preliminary discussions began in a cabin, the Wee Mac Inn, on the Magnetawan River. Members, then and now, assume the responsibilities of respecting and protecting the environment and of passing it on to those who follow.

Normal Burning - Permits required, day time burning permits may be issued with the Chief Fire Official or his/her designates approval. Fires for cooking and warmth are permitted. The fire must be contained with a grill for cooking and extinguished after cooking is completed.