Click this link for full details on the upcoming meeting on January 20th, 2021 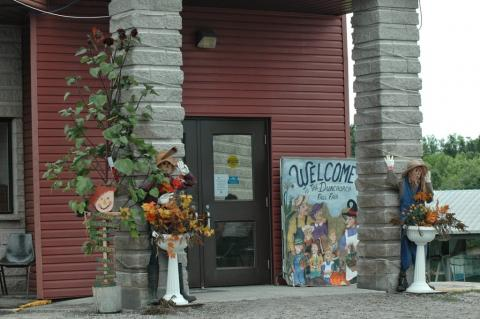 The Agricultural Society received Provincial recognition in 1889 and thus we are 131 years old as of the 2020.  According to the Minutes found in an attic by Mr. Thomas Johnson, however, the Agricultural Society was formed a year earlier in 1888.  The Minutes go on to tell us that there were fifty-nine (59) members that year, and that membership cost only one dollar ($1.00). This fee was to continue on for many, many years.

The Dunchurch Community Hall, first known as Kelcey Hall, usually hosts the Fall Fair.  Thanks to the generosity of the Township and the Royal Canadian Legion Branch 394, the 1982 Fall Fair was held on Balsam Road.

In the beginning, the Dunchurch Agricultural Fall Fair was held around September 20th until 1968 or 1969, when the Agricultural Society Board decided to brave the wrath of habit and move the Fall Fair date to two (2) weeks before the Labour Day Weekend.  This drastic move eliminated (most of the time) the frost damage usually dealt to the Flower and Vegetable Exhibits.  It also allowed another segment of our Community to become involved... the people who have a summer home here!  One particular event that visitors remember, is the birth of Fairin Dunchurch, a calf born to one of Gord and Alanna Stewart's cows at the 1988 Fall Fair, one year before our 100th Celebration!

School participation was a big part of the Fall Fairs held in September!  The children from the different Schools in the area competed, as well as participated in the School Fair Parade!  Almost every local family from that era has pictures of the children in the Fall Fair Parades, and a few of the participants even remember the School yells that took place after the home-made Banners were marched onto the Fair Grounds!  Many people, who have been Agricultural Society Board Members over the years, gave the Community a lot of time and energy in their commitment to the Agricultural Society Fall Fair!  Also appreciated, are the Fall Fair goers, whose smiles make the year of hard work all worth while!

Normal Burning - Permits required, day time burning permits may be issued with the Chief Fire Official or his/her designates approval. Fires for cooking and warmth are permitted. The fire must be contained with a grill for cooking and extinguished after cooking is completed.