“A community thrives by its dedicated individuals”

words which many volunteers bring to life. Federal, Provincial, and Municipal politicians and judges are not eligible and, no posthumous appointments are made. 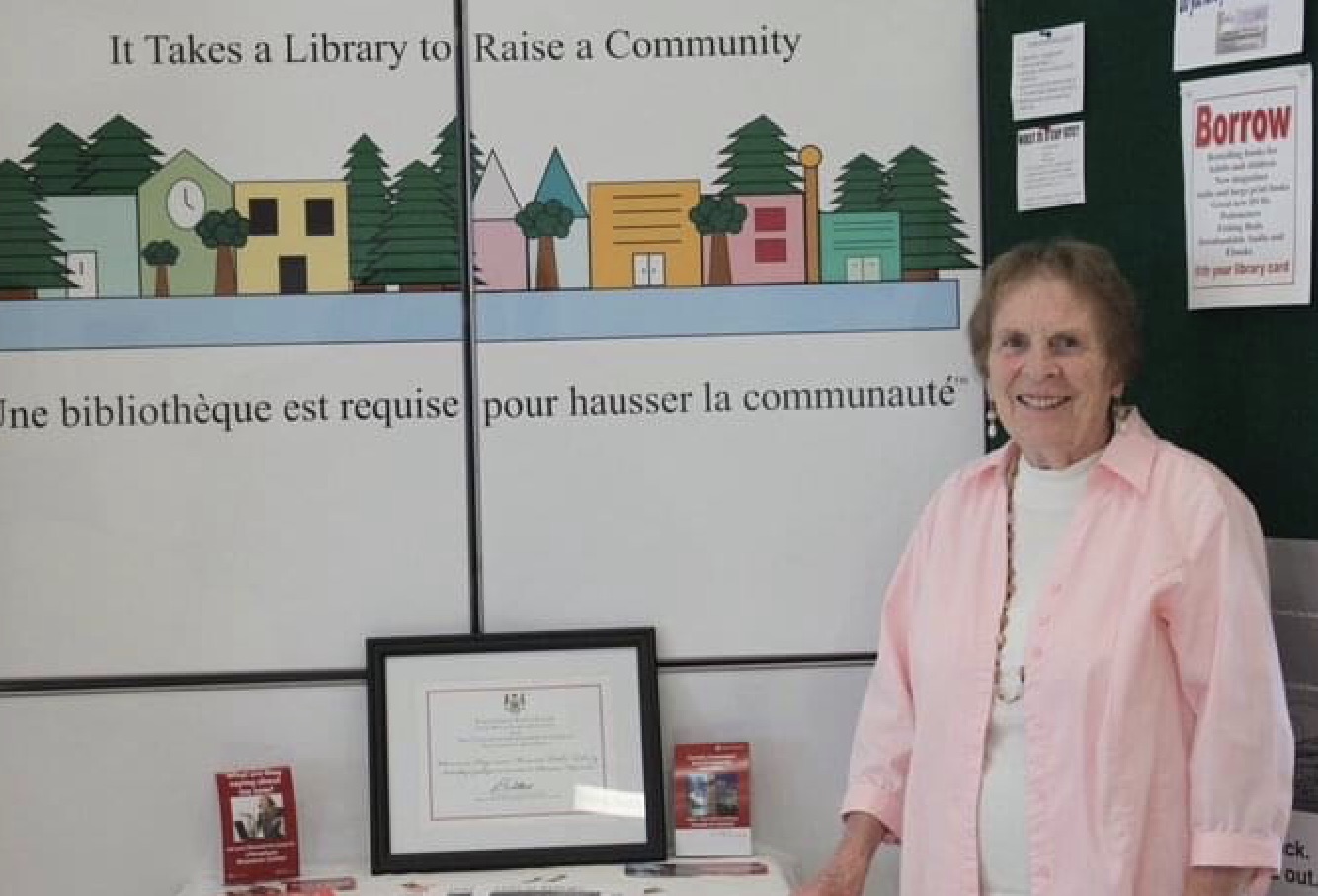 In the early 1990’s, Elizabeth and her husband John moved to Ladd’s Road from southwestern Ontario.  They started a firewood business where they supplied firewood to many residents in the community of Whitestone as well as the Ontario Teachers camp. Elizabeth is not afraid of hard work!  She was raised in a farming family and she thoroughly enjoyed splitting wood and loading the firewood for delivery. Elizabeth has volunteered in Whitestone for over 26 years.  For many years she served in numerous capacities at the Whitestone Public Library and founded the “Friends of the Library” group.   Elizabeth and John began collecting aluminum cans to raise funds for the Library and also started a very successful book sale which became a major fundraiser.   She served as a very active Library Board member and anyone who has attended a council meeting in the past 2 or 3 decades will recall seeing Elizabeth in the audience.

In addition to her Library work, Elizabeth has been a member of the Maple Island Thrift Shop committee for many years where she currently holds the position of Secretary - Treasurer. Being a stickler for numbers made Elizabeth the perfect person to handle the financial end of the daily operation of the thrift shop.  Her commitment to the ongoing operations at the thrift shop have been admirable.  She works tirelessly with and for the people and does her best to accommodate everyone.  Elizabeth has been instrumental in recruiting volunteers which are the backbone of both the Thrift Shop and the Library.

Elizabeth likes to be busy, whether it’s cooking 35-pound turkeys for the Annual Thanksgiving Dinner, shopping for supplies for Library events, baking and distributing her Gumdrop cakes at Christmas or playing cards at the Legion many times during the week.  She has put many miles on her vehicle and has touched the lives of many in our Municipality. We are very fortunate to have Elizabeth in the Municipality of Whitestone and the prestigious 2020 Order of Whitestone award is well deserved.  Congratulations Elizabeth!! 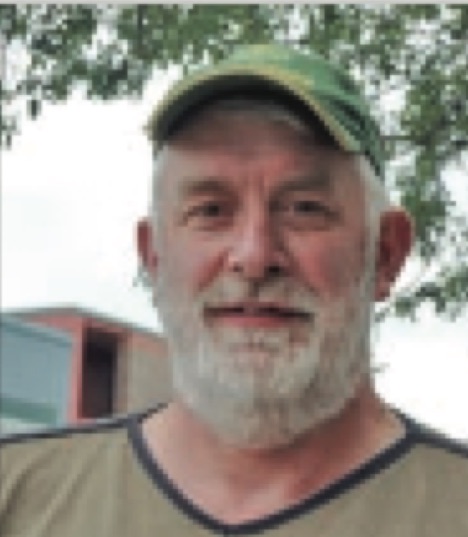 For those of you that don’t know Martin, his English accent is sure to give him away.  Martin came to Canada as a young fellow, met his wonderful wife Mary and became a Canadian Citizen.  Throughout his years living at the end of Canning Road, Martin and his family worked and cared for many neighbours.  Whenever someone needs a little help, Martin is there and has been especially helpful volunteering for the Knox United Church and helping with the Annual Thanksgiving Dinner. Martin has been a member of the Dunchurch Agricultural Society for many years, serving as the President for the last 20.  He wears his kilt with pride in the annual Fall Fair Parade and his enthusiasm for the Junior and Senior Farmers Olympics is contagious as can be seen and heard in the smiles and laughter of all those participating and watching.  Thank you, Martin, for your energetic commitment to the Ag Society and for helping to make it the envy of neighbouring Ag Societies.

Participating in the Recreation Committee, Martin is always there to lend a hand, is a committed volunteer and is genuinely concerned about the well-being of our tight knit community. Martin has coached the Recreation Committee’s Summer Soccer Program for a number of years, he is very involved and well loved by all the children.  When Christmas comes, Martin is right there playing Santa Claus as well as cooking breakfast at Easter time for all the children and their families in the community.  We are very fortunate to have Martin in the Municipality of Whitestone and this prestigious award is well deserved.  Congratulations Martin!! 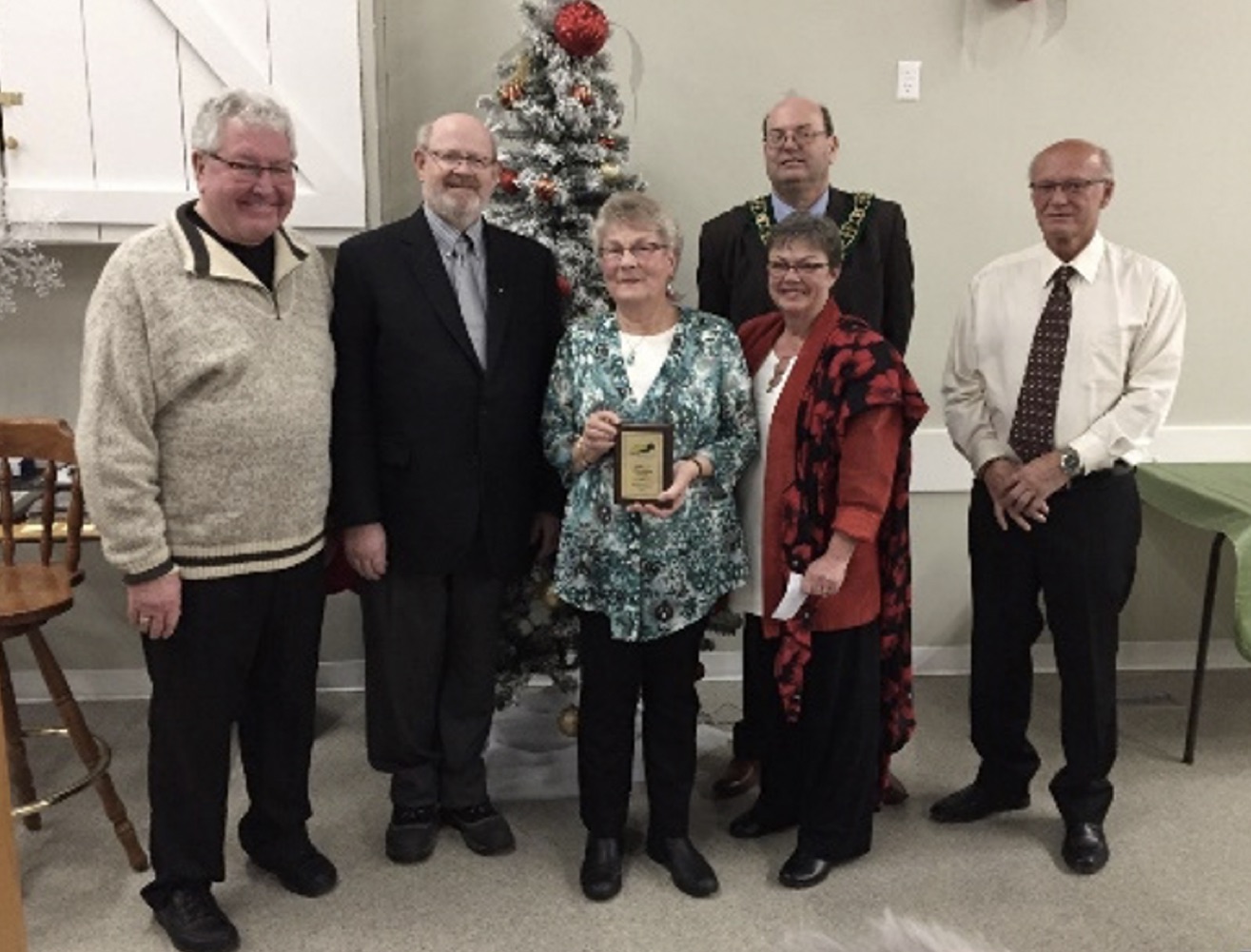 Muriel Stiles has been volunteering for the Municipality of Whitestone for almost 40 years, such an amazing accomplishment and in part the reason for Muriel receiving the 2018 Order of Whitestone award.  From the Cemetery Board to volunteering at Whitestone Lake Central School and everything in between, Muriel is an outstanding member of the Community. Muriel has been a long-time volunteer of the Cemetery Board, recently putting in work to map out the Cemeteries in the Community.  Volunteering for the Whitestone Historical Society Muriel contributed a large deal of historical information to the recent book printed by the Whitestone Historical Society called “Whitestone”.  Muriel’s love of children can be seen in her volunteering for the Whitestone Lake Central School, first when her own children were students and even now with her grandchildren students there.  Either in the classroom, helping with the Breakfast Program or inviting the students to her own sugar bush to teach them how to make Maple Syrup, Muriel is a very active role model for the students of Whitestone Lake Central School.

Keeping fiddle and “old time” music alive can be heard at Ardbeg Music Nights.  Muriel has not only contributed to keeping this tradition alive but has passed down her musical talents to her grandchildren as well.  A very talented family indeed.

We are extremely proud to have Muriel Stiles as part of the Whitestone Community. Congratulations Muriel, this prestigious award is well deserved!! 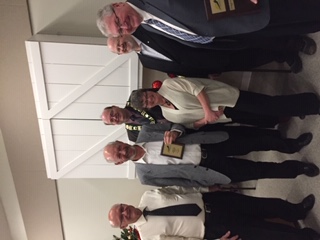 For those of you that do not know Larry, you are sure to recognize him as he is extensively involved in many community groups.  As President of the Whitestone Conservation Association (WCA), you would have seen him at the Dunchurch Agricultural Society’s Fall Fair, and Canada Day Celebrations, educating community members on water safety and conservation.  If you are a Bingo lover, you would recognize him as a committed volunteer fundraising to support our local Whitestone & Area Nursing Station.  You may also recognize Larry as a member of the Whitestone McKellar Lion’s Club, helping run the Crown and Anchor Table, working at our Landfill Sites sorting bottles through their fundraiser there, or as a judge assisting at the bike rodeo, helping kids develop safe biking skills.  The first to step in and lend a hand, Larry is a committed volunteer genuinely concerned about the well-being of the community.  This fall, Larry spent hours of his time helping make a home more accessible so a person in our community could remain in their home.  We are fortunate to have Larry enjoying his retirement in our community and sharing his time with us! 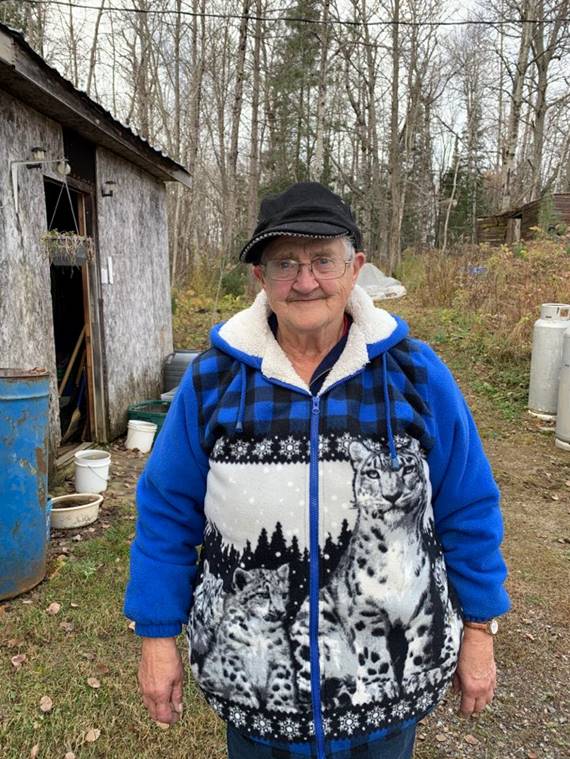 For those of you that do not know Donelda, she has been a long-time volunteer with the Ardbeg Community Club.  She has lent her amazing baking and crafting talents to the club for decades.  There isn't a cottager on WahWashKesh Lake that hasn't been touched in some way by the Hayward family, whether it be going to their store, or getting a helping hand around the lake.  Cramadog Snowriders has benefited for years through the family's generosity in allowing them to use the Hayward property in Ardbeg, which is in close proximity to the snowmobile trails, to store their groomer and sleds.  Donelda is not one to draw attention to herself, but she represents what makes this community and her generation special.  She is a role model for us all, in her quiet way of being there for the community.  It is fitting that Donelda Hayward be the first recipient of this award.  She sets an example to which we can all aspire of how we can treat each other well and help where help is needed.  We thank Donelda for her many years of contributing to her community.  They speak volumes!

Fires may start easily and spread quickly but there will be minimal involvement of deeper fuel layers or larger fuels.